When it came time to take my first passenger for a ride, I knew I wanted to head back to Lancaster, PA. KLNS is a great little airport for a few reasons: it’s got a great restaurant on field (Fiorentino’s), it’s far enough from Frederick to count as a cross country for my instrument rating requirements, and it has a lot of free transient parking.

It’s also home to one of the biggest pilot shops on the East Coast. 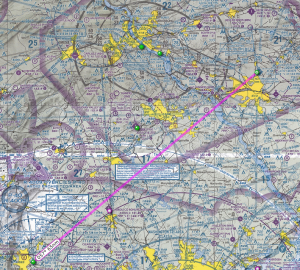 So my buddy Sean and I geared up for a trek up to Lancaster. Our first attempt got scrubbed because of weather, but we made it up on an unseasonably warm February afternoon.

I’d been to LNS before — it was the destination on my first solo cross country trip as a student pilot. But a time crunch meant that I missed out on going to Airways’ pilot shop the last time around, so I had a good incentive to head back.

Unfortunately, the way up was bumpy. In fact, it was one of the more turbulent flights I’ve made in a small plane, and by the time we made it to our destination, Sean was starting to feel a bit queasy. But lunch at Fiorentios and an extra dramamine cured that in short order.

I got the iPie — a personal pizza that’s shaped like a 12″ sub. It was great. Sean opted for one of the Ciabatta roll sandwiches (it looked really good).

As is always the case with general aviation, you can’t have your plans set in stone. So even though we’d booked the plane for the whole day, an approaching cold front back at Frederick forced us to leave a little early. No pilot shop on this trip either.

Thankfully, our return trip to Frederick was a lot smoother.

And with the cloud base above us, Sean was able to grab some great photos along the way back. Frederick tower gave us a straight in approach, and a smooth landing was a nice cap to the day — especially after the battle with turbulence I had to wage to get on the ground in Lancaster.

You can watch a video of our trip below: