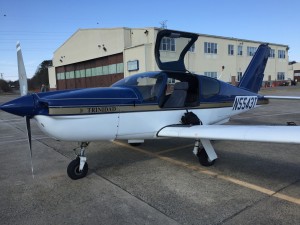 My flight school’s 1992 Socata Trinidad TB20. An awesome airplane, but not a typical commercial trainer.

The commercial checkride needs to be done in a complex airplane. That means it has to have retractable landing gear, flaps, and a constant-speed propeller. The Trinidad fits that bill (plus, it’s high-performance too) — and it’s one of the main reasons why I chose that flight school. It’s a lot more plane than most complex trainers, and I figured that would make me a more competent pilot.

But I hadn’t planned on trying to “master” the airplane inside of just three weeks.

So, I had two options: wait until the Trinidad was available again at end of the year, or cram all my commercial training into about three weeks before the new engine. I chose option #2.

The problem was that I still needed to log about 33 hours of total time and a handful of commercial requirements before I could take the checkride. That’s a lot of time to pack into a month.

My instructor and I talked about it, and we mutually decided that we could make it work.

So, I took half days from work for the entire month, booked the Trinidad every weekday, and scheduled the checkride with the DPE. It was on.

Thankfully, mother nature was on my side. Weather was been really nice overall in August – I only missed a few days because of storms. And I made that time up in a Redbird FMX simulator (you can use up to 50 hours in the Redbird FMX towards the CPL if it’s logged by a CFI, but be warned: IACRA can be tricky for sim time).

Luckily, I also had an extremely experienced instructor (about 10,000 hours dual given) who held me to very high standards. That made for more than a few frustrating flights and lots of time out of my comfort zone, but I grew a lot as a pilot last month.

Fatigue was a real factor during the month. I’d figured that I would be able to pack two training flights into a single day if I needed to, but in practice that just wasn’t realistic. After a couple hours of working on commercial maneuvers, I was really too mentally drained to get anything accomplished in the second session of the day — so I only attempted that one time.

And after logging more than 10 hours in the Trinidad in a single two-day stretch (that double-header lesson plus a 6-hour commercial solo XC flight), I had to take a mental health day to recover.

There were times when I wasn’t sure if I’d be able to make my checkride deadline. But in the end, I was able to tick all the boxes in time for the flight test. All told, I ended up logging about 38 hours in August including the checkride. It was an expensive month. 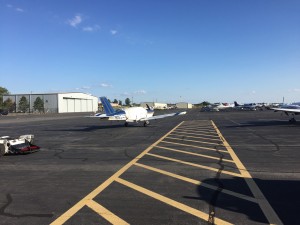 N5543T sitting on the ramp at Leesburg, ready for a checkride first thing in the morning.

While the Trinidad was based at Tipton Airport (KFME) in Maryland, the checkride was going to happen in nearby Leesburg (KJYO) Virginia. One decision I’m glad I made was flying down to the airport the night before. I wanted an early morning checkride so that I’d have it over with early-ish, and having the plane already there got me a couple hours of extra sleep.

The Homewood Suites in Leesburg was cheap, comfortable, and offered a free shuttle in between ProJet (the FBO at Leesburg) and the hotel.

Staying down there also gave me a chance to refresh mentally, which I really needed at the end of that three-week stretch.

A Few Notes for Commercial Applicants

I’d guess it took about 10 hours to get proficient in the commercial maneuvers: Lazy 8s, Chandelles, Power-off 180s and Eights on Pylons. That’s after I got comfortable with the faster, heavier, complex airplane.

If I was less proficient to begin with, or flying less than once a week, I’d count on needing more time…

The Trinidad is a great cross country airplane, but that makes it a slightly trickier commercial trainer. High wing loading means that it cruises fast, but it drops like a rock when the power is pulled. That made power-off 180s tricky. Overall, though, the Trinidad’s positive attributes (like benign stall characteristics, great low-speed handling, and lots of power) make up for the negatives.

There were times during the course of my accelerated commercial training month that I got pretty frustrated. Having a big, hard deadline took a lot of fun out of the process. I think I would have enjoyed it a lot more without that factor.

And I certainly felt relieved to have that temporary airman certificate in my possession. I finally got to take a break!

When my examiner asked whether I was going to head right into instructor training, my answer was a quick, “Heck no, I need a break!”

Well, the funny thing is that I haven’t been able to stop thinking about moving onto CFI training and flying from the right seat. I’m a flying addict. Hopefully my drug of choice is about to get a lot less expensive in the next year, as I work on becoming an instructor.

A Hitch in the Plan 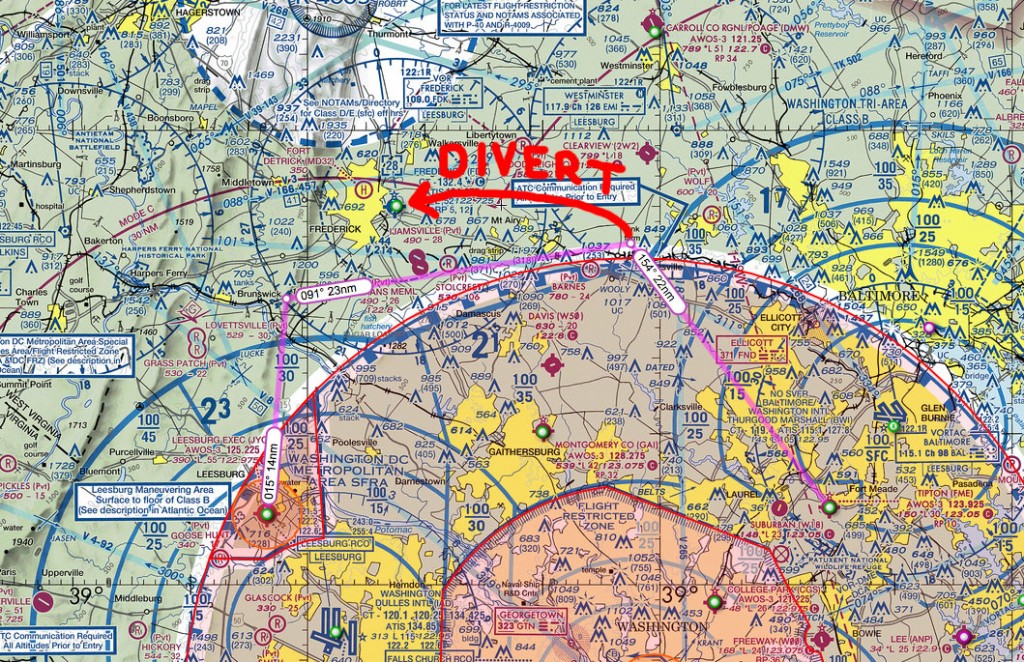 I got one last curveball on the flight back to Tipton after my checkride. I exited the Leesburg maneuvering area, and transited Frederick’s Class D airspace towards the regular part of the Washington D.C. Special Flight Rules Area (SFRA). When I called Potomac to get the “all clear” to enter the SFRA, they couldn’t get radar contact.

Turns out the plane’s transponder was suddenly totally INOP, and I couldn’t enter the airspace surrounding Washington.

After troubleshooting for a bit, I diverted to KFDK. I grabbed lunch while I waited to hear what I should do next, and ended up renting a car to get back to Tipton and get my car back. So much for my plan to get done early.

But I couldn’t have cared less about getting stuck at the airport for a little while — I was finally a commercial pilot.