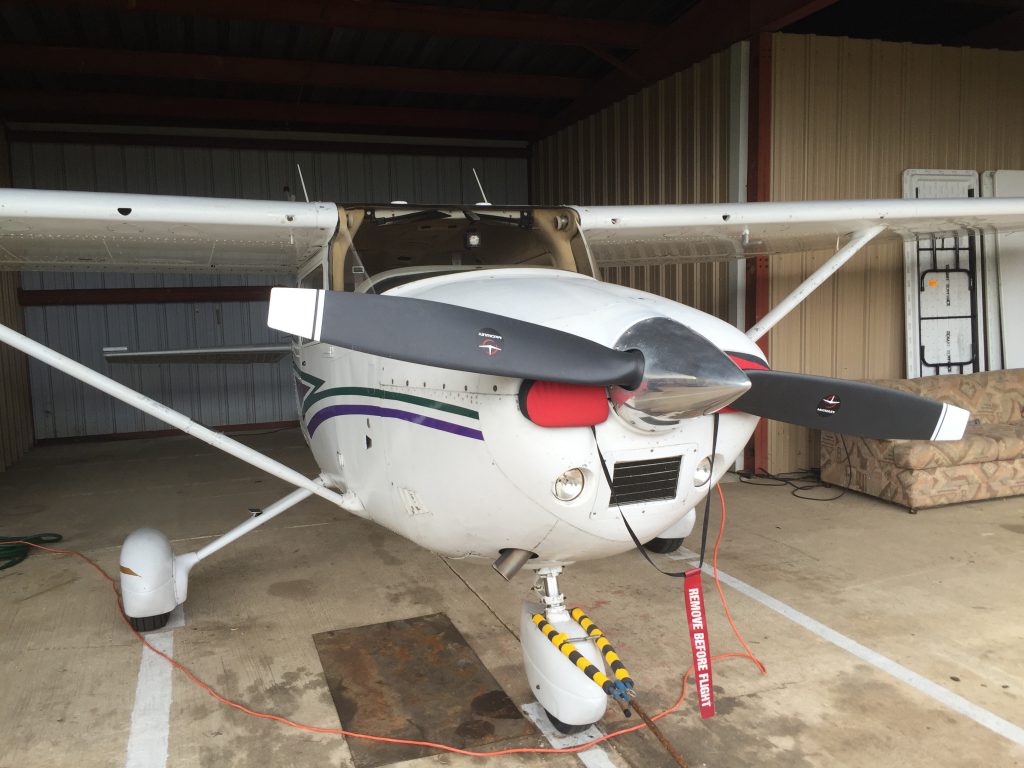 One not-so-trivial consideration was distance. This particular aircraft was located an hour’s flight south of us, in the mountains of Western Virginia. Our second runner up in the search was much further away in Kentucky, which we figured would cost us at least $1,000 per trip to rent a plane down to check out the airplane and inspect it. After visiting the first plane, we opted not to check out the KY plane.

Once we found it, it was time for inspections…

We ultimately decided to get two inspections: a prebuy and an annual.

There’s no such thing as a “prebuy inspection” — at least not as far as the FAA is concerned.

In other words, if you decide to get a prebuy, there’s no specific list of things that the A&P mechanic is required to check. In theory, a mechanic could take a glance at the plane’s outside, decide it looked good enough to him, and give you the go-ahead. That’s obviously one very good reason to use an A&P mechanic whom you know and trust for your prebuy inspection.

Because of the discretion involved in the prebuy, we decided to get an annual inspection as part of the process. An annual is a lot more rigid than a typical prebuy, even if the scope should probably be the same in theory. That’s because, at the end of the annual inspection, the A&P-IA has to sign off that the aircraft is in a safe and airworthy condition, and anything lacking needs to get fixed before that signature and A&P number get scribbled in the aircraft logbooks.

Our broker helped us find a recommended A&P to do the prebuy, and once we were satisfied with the plane’s condition, we agreed to split the cost of the annual with the sellers.

No used aircraft is going to be problem-free, so one big benefit of the prebuy was that our mechanic gave us a bottom line assessment of the plane: “This is a good airplane with a lot of extras… I think you will be getting a fine aircraft.”

That was hugely helpful.

Less helpful was the fact that some items were missed by both our mechanic conducting the prebuy, and their mechanic doing the annual. No A&P is going to catch everything, but there was some stuff that really should have been caught — namely a nose wheel tire that was worn beyond spec. In hindsight, I think we would have had better luck if we’d flown our local mechanic down for the prebuy instead of using someone we didn’t already have a relationship with.

If you’re not already an aircraft owner and don’t already have a relationship with an A&P, there are tons of places online and around your local airport where you can ask. (If you’re looking for a great A&P shop in Maryland, we’ve been very happy with Bart and his crew at Advanced Helicopter at KFDK.)

Another good option is to engage a well known maintenance management firm like Savvy to take care of the prebuy process for you. It’s going to be a little more pricey than using your local A&P, but if you’re a first-time owner and don’t have any A&P contacts, it’s not a bad strategy.

Type clubs are another huge ally for your airplane purchase — nobody knows more about specific models than type clubs, and they can also often refer members to A&Ps and flight instructors who specialize in the type. We joined the Cessna Pilots Association, which gave us access to a huge library of maintenance information and

The Buy Process: Our LLC

Finally, a couple notes on the buying process…

We started off with a partnership of five guys. We all had AOPA’s Pilot Protection Services plan, which I can’t recommend enough. They paired us off with an experienced aviation attorney who guided us through the process of forming our LLC, structuring our lease agreement and bylaws, and reviewed all of the purchase documents. Once again, having someone guiding us who knew the process and had our interests at heart was invaluable.

(As an aside, I absolutely recommend buying AOPA’s PPS plan — if you run into legal or medical questions or issues, it’s a cheap insurance policy.)

One thing we discovered was that a lot of the advice we’d gotten from pilot friends about filing for a Delaware LLC to avoid Maryland taxes was bad advice. Since our plane was getting based in Maryland, we were still subject to use tax for the purchase. It wasn’t great to hear we’d have to pay that huge tax bill, but it was comforting to know that we were complying with the law and wouldn’t get hit with a surprise tax bill down the road.

Again, having our own aviation lawyer (who was also a CPA and CFII) was huge.

If you’re buying a plane yourself and don’t plan on letting others fly it, there might not be a ton of advantage in forming an LLC to buy the airplane. If you operate an aircraft negligently an LLC won’t protect your assets. The biggest benefit is that it shields other partners from personal liability caused by another partner.

We were also not totally sure about how many partners we ultimately wanted to share ownership with, so the LLC structure made it easy to change rather than having all the partners on the FAA registration and title.

Getting insurance was a pretty easy process…

We went through Aviation Insurance Resources, who got us great coverage for a lot less than the other quotes we’d looked at. Our policy also included $100,000 in renter’s insurance coverage, an incredibly permissive open pilot warranty (which allowed anyone with a private pilot certificate to fly the aircraft fully covered), and only an hour of dual instruction for each named pilot.

There’s a lot to be said for buying the airplane equipped the way you want — upgrades are incredibly expensive, and you rarely get 100% of your money back in the form of increased value.

We didn’t take that advice.

Instead, we ended up completely refurbishing our airplane with a brand new avionics panel, a new paint job, and a new interior. In the next installment, I’ll start breaking down the upgrade process… there was a lot to it! Click here to read it now.