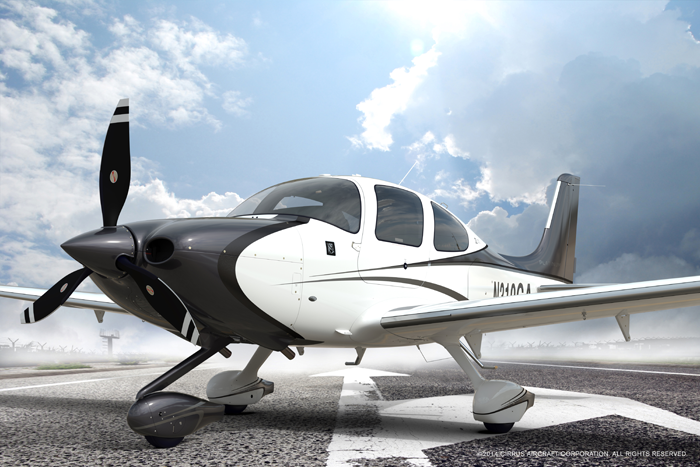 Depending on who you are, that statement could mean two very different things. Either way, if you’re considering adding a Cirrus to your logbook, then this flight review is for you…

But before we get to the flying experience, we’ve got to deal with the elephant in the room. (Or, you can skip to the video.)

Let’s face it: there’s a stigma around Cirrus pilots. And it’s not a positive one: they’re rich autopilot button-pushers who rely on parachutes as a substitute for airmanship skills. And the safety statistics don’t help: the fatal accident rate for Cirrus has been higher than the GA average, and the rates to insure a Cirrus for a low-time pilot are astronomical.

I’ll admit, I fell for the stereotypes too. But, without putting too fine a point on it, they’re dead wrong.

First off, the Cirrus is a beautiful airplane. It’s got ramp presence. And that, frankly, is one of the biggest problems. Cirrus is good at something that few other aircraft manufacturers are today: marketing their aircraft as an object of lust for successful people. Cirrus has a nicer website, it’s got cooler t-shirts, and its ads are sexy.

The problem is that the guy who can afford a brand new Cirrus SR22 isn’t always the guy who’s most qualified to fly it.

That’s something that the company has done a good job of remedying in the last few years by introducing new training. Over that stretch, the fatal accident rate in the Cirrus line has dropped materially below the GA average. Put simply, the Cirrus is a high performance aircraft that needs to be flown like one (yes, even the less-powerful SR20). Inattentive, rusty pilots with big checkbooks gave Cirrus a reputation that it didn’t deserve…

But the company is taking that reputation back.

A few months ago, with the club’s Piper Archer in the shop for maintenance, I figured it was a good opportunity to fly one of the Cirrus SR20s sitting on the flight line at Frederick Flight Center. My steed was N874T, a 2009 model with Garmin’s Perspective avionics (think a G1000 with a few Cirrus-specific items). 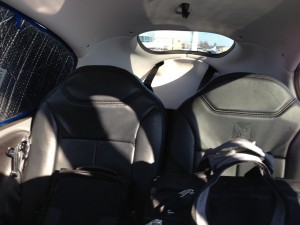 The big leather back seats of the SR20

If you’re used to typical 4-seat trainers, the Cirrus will feel huge. It’s got a wide cabin with great visibility and a center console. The side yoke gives passengers and pilot alike even more space up front — more on that in a moment. The interior will make the Cirrus an instant hit with spouses riding up front.

So will the Cirrus Airframe Parachute System. There aren’t many planes that can survive a midair collision — but thanks to the chute, the Cirrus is one of them. It’s probably true that having a parachute makes it easier to be a lax pilot. But for a proficient pilot, there’s no question that having an airframe parachute provides a major safety benefit.

The SR20 is powered by a 200 horsepower Continental IO-360. That powerplant gives the SR20 plenty of get up and go to lift of the runway quickly.

Controls are crisp, and the side yoke is easy to get used to. While some pilots don’t like the spring-loaded action on the side yoke, I didn’t mind it — but it’s important to keep the plane trimmed (using the sensitive 4-way hat switch on the yoke for aileron and elevator trim).

From an avionics standpoint, the SR20 is incredibly well equipped. The Garmin Perspective system provides exceptional situational awareness, and the integrated autopilot can fly coupled instrument approaches all the way to minimums. That’s a very nice feature to have when flying single-pilot IFR, but it also echoes the importance of staying proficient hand flying approaches. Lazy pilots will find it easy to lose proficiency, but that’s true of most new cross country planes today.

Speaking of which, cross country flights are where the Cirrus shines. We flew from Frederick (KFDK), across the Chesapeake Bay to Easton, MD (KESN) — we were IFR to make transitioning the Washington DC SFRA and Class B airspace simpler. The 155 knot max cruise made the trip feel significantly shorter.

You want to land the Cirrus like a jet. That is, with a close eye on airspeed and a relatively flat deck angle on the flare. But the landing characteristics are great, and I had no problem greasing the touchdowns.

The Cirrus SR20 is a spectacular airplane with lots of best-in-breed features. That said, it’s not hard to see how it can breed complacency in lazy pilots. I’m looking forward to my next chance to fly one (or an SR22!). It’s worth noting that while Cirrus planes aren’t cheap, some older SR20 models can be had for a very reasonable entry price — if I were in the market for sole ownership in an XC aircraft, the SR20 would probably be my first choice today.

Check out the video of the flight below: