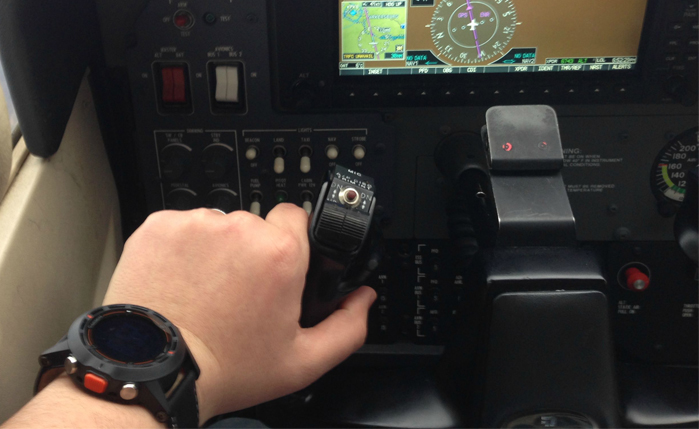 For years, Garmin’s line of watches have been a familiar sight on the golf course or at the running track. But how about in the cockpit?

Of course Garmin is no stranger to aircraft gadgetry. After all, I can’t think of a single new aircraft today that doesn’t come equipped with Garmin avionics.  So, how does the firm’s first aviation watch measure up? Read on to find out…

I might just own the most expensive Garmin D2 in the world. While the watch retails for $449, “shipping” cost me another $1,600 or so — I used it as an excuse to knock out my long IFR cross country on a 650nm round trip from my home base in Frederick, MD (KFDK) to Sporty’s Pilot Shop in Batavia, OH (I69). It was a long flight at 7.8 hours logged, and both my CFII and I were pretty spent by the time we got back home. But that’s a story for another day.

Back to the Garmin D2…

In the box, you’ll get a charging cable, a set of international wall plugs, and a code for a 6-month subscription to the Garmin Pilot app. Oh, and of course, you’ll also get the watch. The top half of the D2 is plastic, and the bottom is made of metal. Overall, the build quality is solid — I’ve dropped the watch several times without any ill effects. The strap that comes with the D2 is leather (and very comfortable at that), but it wouldn’t look out of place with a strap from one of Garmin’s more rugged watches either.

The D2 is rechargeable — it charges via USB, either through a computer or through one of the included wall plugs. Garmin advertises battery life at 50 hours in GPS mode or up to 5 weeks with the power-hungry GPS sensors turned off, and those numbers are accurate in my experience.

While I wouldn’t exactly wear it with a suit, the D2 follows the styling cues of Garmin’s other activity watches — so it’s not out of place if you wear it at home or at the office. The one caveat to that is the thickness. Garmin packed a lot of sensors into a small package with the D2, and the thing is fat as a result.

So, what’s causing that wrist bulge?

The D2 sports a thermometer, an altimeter, a compass, a WAAS GPS (yes, WAAS!)… and it even tells time!

The D2 can also talk to other devices (like a heart rate monitor or Garmin’s VIRB camera) and it has Bluetooth to connect to the Pilot app for iPad. While the screen loses some readability at an angle, the orange backlight is more than adequate for darker environments. After 5 minutes, navigating the pages is pretty intuitive, and the actual sensors are very accurate. In flight, the numbers on the D2 were basically identical to the numbers on my panel-mounted GNS 530W. 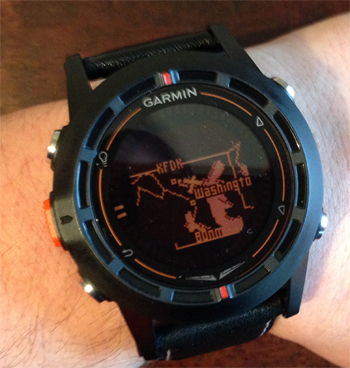 Besides instrument readings like ground speed, track, and temperature, the D2 also has some more interesting functionality like a moving map screen and an HSI. Unfortunately, The database only includes airports, no navaids, which is a bummer, but navaids can be added to flight plans as user-inputted waypoints. Garmin Pilot users can have the app input those waypoints automatically.

Features like the moving map are more of a novelty than anything else, and while I could see some emergency use from the HSI page, some newer Garmin offerings like the Approach S6 golf watch provide some hope that Garmin will upgrade their next pilot watch to a higher-definition full color screen.

(Note to Garmin: if you’re planning on doing that, I’d be happy to test it for you *wink, wink*)

Novelties aside, there are some D2 features that add a lot of utility to your wrist. One is the vibrate feature — you can have the watch vibrate upon reaching a set altitude or time, a useful tool when you wouldn’t normally hear an audible alarm.

The best feature is that the watch always displays zulu time at the bottom of the main screen – for some reason, figuring out UTC time is harder than nuclear fission.

Garmin doesn’t advertise all of the features of the D2 — for instance, it can record your flights in 3D so that you can analyze them back on the ground using Garmin’s free BaseCamp software and the supplied USB cable. From that, you can check out your ground track on a map, alongside ground speed, altitude, temperature, heading readouts. It’s a neat feature, and the D2 can store a substantial amount of data internally.

So, is the Garmin D2 a cockpit essential? No, of course not. While it certainly does sport some useful features (especially if you don’t already have GPS onboard), it’s not a necessity by any stretch of the imagination. If you’re looking for a flying watch, though, the Garmin D2 Pilot watch fits the bill really well. Just as importantly, it’s a useful daily-wear watch when you’re not sitting in an airplane too.

Don’t buy the Garmin D2 hoping that it’s anything other than a neat toy. But as far as toys go, it’s pretty neat indeed.