[Note: For my review of the QT Halo in-ear headset, click here.]

I’ve got a SoundDock sitting next to my basement bar, and I’ve got a pair of QC3 noise canceling headphones sitting in my desk at work. They’re both great products. So, when I decided that I wanted a new high-end aviation headset, the Bose A20 seemed like an easy choice.

But this review isn’t about the Bose A20.

On doing a little digging into headsets, it was clear that the market was split in two camps: Bose vs. Lightspeed Aviation.

I didn’t know much about Lightspeed — my CFI has a set of A20s, and loves them. But after doing a little digging, it was clear that my choice wasn’t going to be so easy. For every   positive Bose review, there’s another beaming Lightspeed customer dishing complements on his or her Zulu.2.

After trying on both headsets, there wasn’t a clear winner either — both feel really nice. And the active cancellation is stellar on both. But the Zulu.2 has some advantages that tipped the scales:

First is cost. A pair of Zulu.2s isn’t cheap by any means, but at around $200 less than the A20s, the difference is material. That’s an hour or two of flying!

The FlightLink app is another big plus. With the Zulu.2s, you can plug into your iPhone or iPad and record cockpit audio (and even replay the last 2 minutes of ATC transmissions). If you’re not flying an aircraft that can replay transmissions, that’s a really nice feature. The Zulu.2 can also stream Bluetooth audio — not a feature that’s very important to me, but an attractive feature nonetheless.

I was sold. I ordered a pair of Zulu.2s online and eagerly awaited the UPS man…

Lightspeed makes a sexy headset. It’s good looking (the ear cups are made out of magnesium, not plastic, for extra noise reduction), you can feel the build quality, and it’s extremely comfortable.

This hard carry case is a good place to carry your pilot certificate and medical. 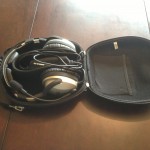 The Zulu.2 packed and ready to go 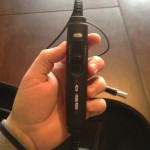 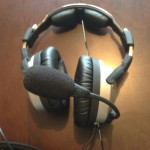 In the box, the first thing you notice is the hard shell case. It’s well-made, and has a pocket on the top half; that pocket is a nice feature, since you can carry your pilot certificate and medical in the headset case if you want to avoid carrying along a bulky flight bag. The headset fits snugly, with a space for the control fob and extra cords in the center.

Ultimately, the proof is in the flying. So I was pretty eager to put the Zulu.2 through its paces.

I got my chance on a cross country from KFDK to KLNS. 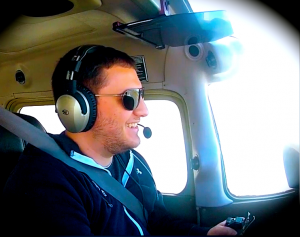 Flying to LNS — photo pulled from my GoPro.

The noise cancellation on these headphones is stellar even without battery power — I know this because I mistakenly thought that the headphones were on during our first leg up to KLNS. When I actually turned them on for our return flight, I couldn’t believe how amazing they sounded.

Be aware that if you’re not used to flying with high-end active noise canceling headsets, engine noises will sound different, not just quieter. After a few minutes, though, I adjusted to what the Lycoming sounded like with the new gear.

I couldn’t be happier with my headset choice — while my Bose headphones won’t be going anywhere anytime soon, Lightspeed has certainly won my aviation dollar. It’s not just marketing; these headphones really do make flying more fun.

One of the intangibles with Lightspeed headsets is customer service. While both headsets come with 5-year warranties, Lightspeed’s policy is that after the five years are up, they’ll still fix your headset as long as they have parts. As someone who’s been on the wrong side of warranty periods a few times before, that’s a customer service attitude I want to invest in.

Lightspeed also has a long-running Trade Up program that lets customers (of Lightspeed and other manufacturers) trade in their old headsets for a set of Zulu.2s. That keeps a lot of value in the company’s current headsets.