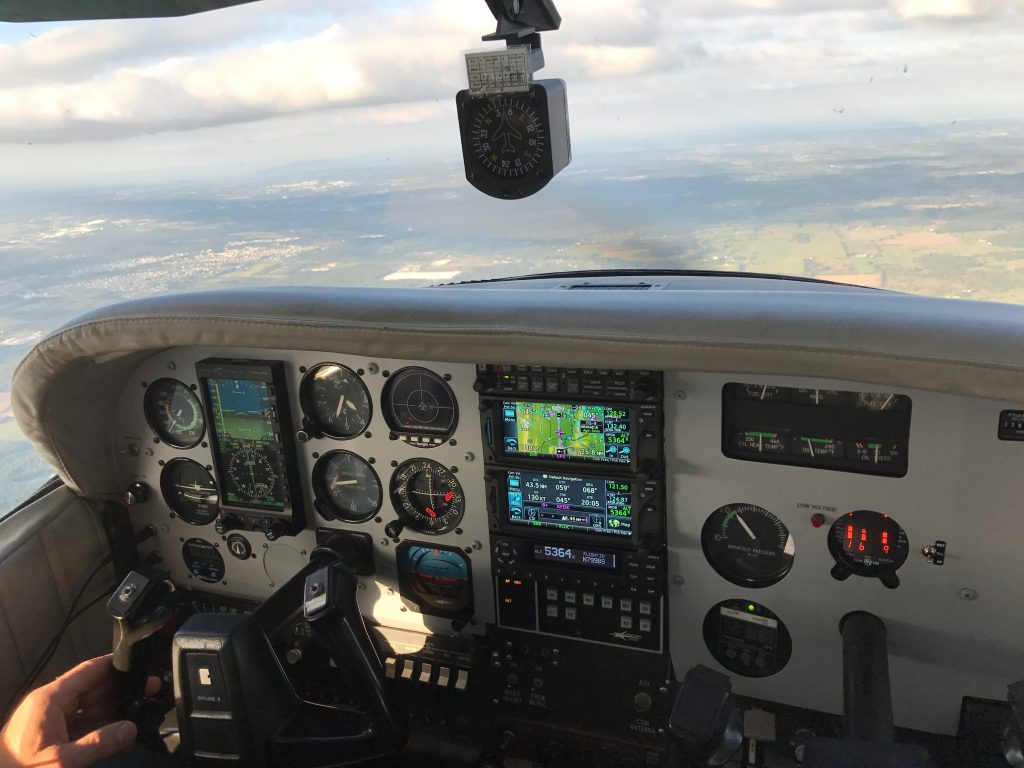 Our HSI was a Century NSD-350A, a non-slaved version. Ideally, having an HSI that was slaved to the compass would have been great, but we could live with the minor drawback of having to reset the DG component every once in a while. First world problems. 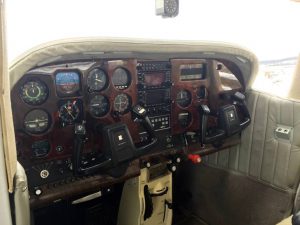 The problem was that the HSI would show us consistently off heading and intermittently flag. So we headed to the avionics shop to get it fixed.

$2,109 later, we had a rebuilt HSI. Ouch, welcome to aircraft ownership…

At the time we mulled around the idea of going with glass. The extra cost of installing an Aspen Evolution 1000 PFD was pretty high, but not having to pay for the HSI rebuild would have amounted to a pretty big discount off the price of the unit.

But we were pretty fresh off our aircraft purchase at the time, and still trying to get a handle on what our long-term ownership costs would look like before we sunk big bucks into an upgrade…

A few months later, more HSI issues. We came to find out that the Century NSD-360A is widely considered by avionics techs to be a piece of junk.

We had our avionics shop pull the unit again, and it tested fine on the bench. Put simply, it wasn’t totally clear whether it was our HSI or a connection issue somewhere else in the system. After spending another thousand dollars or so chasing gremlins, we decided that our money would be better spent upgrading the panel. We’re all IFR pilots, and the idea of flying in actual conditions with equipment that was less than 100% reliable was a nonstarter. The plane just wasn’t going to work for us in its current panel configuration.

With ADS-B compliance for 2020 looming anyway, we knew that we’d be due for a transponder upgrade at a minimum anyway — and the cost of replacing the HSI with another mechanical model and/or slaving it would have been huge.

It made sense to just go with glass and avoid all the issues of a vacuum-driven mechanical system, while taking care of all the upgrades we’d need/want at the same time.

From the onset, we knew that this was going to be a very expensive endeavor.

At a minimum, we wanted an Aspen Evolution 1000 PFD to replace our crappy HSI and attitude indicator, and we also wanted a Garmin GTX345 transponder to replace our aging unit and give us the ADS-B capabilities required by law for 2020. If it made sense, we also wanted to upgrade our aging GPS NAV/COM units with the latest GTN series from Garmin (we also looked at Avidyne’s IFD-series of GPS units, but decided to stick with Garmin in the end for a variety of reasons).

If all of that made sense, we also wanted to add fuel flow to our engine monitor and get rid of the faux wood trim on the panel.

So we started getting quotes. We stuck to two different kinds of shops — nearby avionics installers who we knew had a good reputation, and the big national avionics shops that do huge volumes and can get deep discounts. We figured it might be worth flying the plane down to Florida or over to Cincinnati if the savings were big enough.

One of our partners was headed to Oshkosh a couple weeks later, which gave us a great opportunity have one of our insiders talk to avionics shops and play with different units.

Ultimately, the best pricing and responsiveness came from Shenandoah Avionics, a shop located about an hour’s flight away from our home field.

Picking Out the Pieces 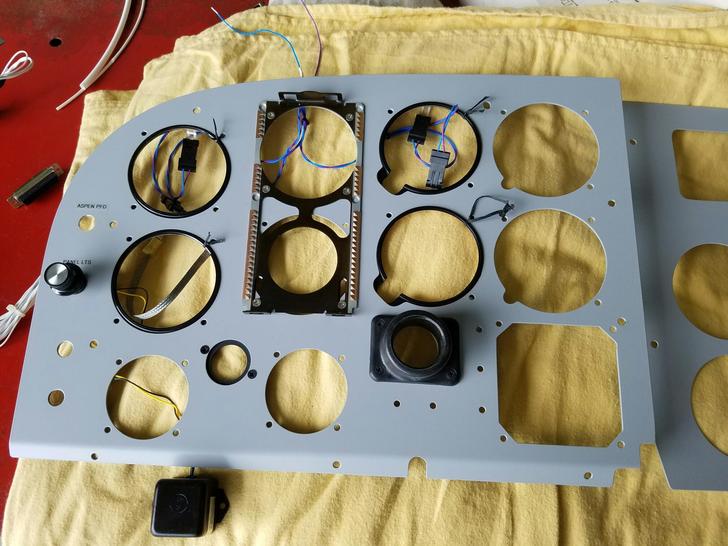 The new battleship grey panel ready to be installed — and to replace the 80’s style faux wood.

We already had a very clear picture of what we wanted in the panel.

One of the big questions we encountered was whether to replace the Garmin GNS430W units with a pair of the new GTN 650 touch screen NAV/COMs or one big-screen GTN 750 (or one of each).

In the end, we went with the dual 650s because of redundancy (2 IFR-capable GPS receivers), display flexibility (being able to have two different screens up at all times), and well as simplicity of updates. Data entry is super easy with this setup — like our 430s did, these two units crossfeed all data (only enter a flight plan change once), and we have a Flight Stream 510, so we can send routing directly from our iPads to the panel or vise versa. The Flight Stream can also update both GTN650 databases via wifi from an iPad (it’s a pain to manually update the data cards in the old 430s every month, especially for those of us who live far from KFDK).

Since we all fly with iPads anyway for IFR charts, there wasn’t a really compelling reason to do a 750 instead, and we didn’t have panel space for both a 750 and a 650 without major modifications.

The upgrade to the Garmin GTN 650s was expensive. While we were able to get about half off each unit by trading in our old 430s, it did represent a big expense — but it was one that we felt was justified. Having flown behind a GTN650 for a couple dozen hours, the interface is fantastic (data entry is much quicker and easier) and the screens are much higher resolution and easier to read in flight.

The decision to go with the GTNs was probably the one thing that we could have done without (and one we debated), but in hindsight, all the partners agree it was worth doing. 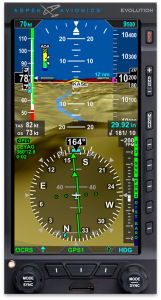 Pro Plus PFD with Synthetic Vision and Angle of Attack. Image courtesy of Aspen Avionics.

We’d originally only wanted the Aspen PFD to get rid of the issue-prone mechanical HSI.

But we found that the Aspen actually added some fantastic capabilities to our airplane. For instance, it displays all the data in the conventional six-pack, and then some. It also calculates things like actual current winds and temperatures aloft, and can display traffic, waypoints, and terrain.

Shenandoah Avionics gave us a great deal to upgrade to synthetic vision and Aspen’s new angle of attack indicator (both are software-only upgrades).

The Aspen also offers a GPS Steering mode, which talks to the autopilot when it’s in heading mode to automatically handle course changes and fly course reversals and holding patterns without any pilot intervention. That’s functionality that we didn’t expect when we opted to install the Aspen, so it was a pleasant surprise when we discovered it.

One of the most attractive aspects of our new panel is how connected everything is.

The Aspen PFD pulls data from the GTNs. The GTNs talk to the transponder (you can actually change your squawk code from the 650’s touch screen!), and display all of your ADS-B in traffic and weather on the display. They also use the FlightStream 510 to talk to your iPad, which can push database updates wirelessly and send and receive flight plans from Garmin Pilot or ForeFlight. The FlightStream sends all of the ADS-B data to your iPad as well.

The GTNs now also talk to our EDM700 engine monitor to grab fuel flow information and provide distance rings on the map, for example.

And it all works seamlessly with the original legacy 2-axis autopilot, which can fly a fully coupled approach. In short, our little 182 now has an avionics package that’s more capable than what you’d find in most business jets or airliners on the ramp today. 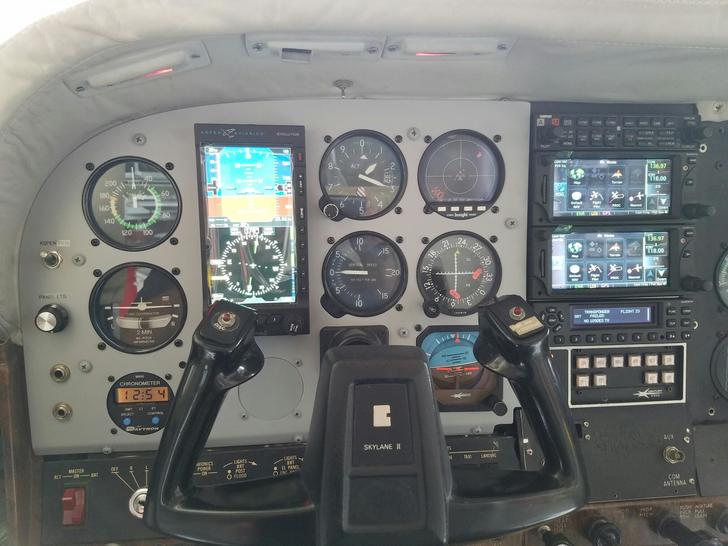 Our new panel at the avionics shop — with plastic screen protectors still on all of our new gizmos!

Being a CFI, training was on my mind from the get-go.

Legally, nothing changed about the 182 after its upgrades. It may be the same airplane as far as the FAA is concerned, but it’s a terrible idea to underestimate the transition from a standard six-pack to the latest glass cockpit technology available.

Luckily, there are some great resources available if you decide to take the plunge and add some new tech to your panel.

One of the biggest changes was the Aspen PFD. While I’d had experience with Garmin’s G1000, I’d never used an Aspen. That said, if you already have any technically advanced aircraft experience, the transition is minimal. But pilots should, at a minimum, familiarize themselves with basic functionality and emergency procedures before embarking on their first flight.

I bought Sporty’s Flying the Aspen Evolution iPad App, which covered all of the functionality of the PFD in a series of short videos. I was happy to see that it also included new videos on the latest software upgrades and the angle of attack and synthetic vision options.

Meanwhile, the GTNs shipped with a short DVD overview that should be sufficient for anyone already familiar with Garmin’s “buttonology” to have no problem using the new NAV/COMs.

We haven’t had much time to play around with the new panel — a week or so after ferrying the plane home from Shenandoah Avionics, it was time to bring the 182 down to North Carolina for a completely new paint and interior job.

But one of the early snags we ran into was with the just-released Flight Stream 510.

The Flight Stream provides the connectivity between the pilot’s EFB app (ForeFlight or Garmin Pilot) and the panel. One very nice feature is Database Concierge, which provides the aforementioned database updates to the plane over wifi through Garmin Pilot.

The good news is that we think we’ve narrowed down the root cause of the Flight Stream 510 fiasco — the GTNs need a software update to bring the unit to Garmin’s SW v6.21 for database sync to function. Hopefully that solves it.

For now, we’ll just have to wait. The plane is still undergoing its makeover as of this writing…

Stay tuned for Part 4 of this series on buying and updating an airplane — in it, I’ll take you through the paint and interior process.